Top Seven Pig Jokes to Make Your Workday Fly By

Last week at the office we were all studying a pig anatomy book. None of the information was new; in fact, it was all pretty standard stuff—until we got to the end. Then there was a twist in the tale! So we decided to go hog wild and post some sty-lish jokes that'll make you squeal! Stay until the end and there's another surprise!


What do you call a pig that does karate?

I'm Bacon some Eggs and Bacon

On his way home from the market, a little piggy stopped at a restaurant and asked the waiter for a glass of water and directions to their restroom. The waiter grabbed the glass of water and said, "walk down that hall and it's the second door on your right."

After a long morning at home, another little piggy decided she wanted a cup of coffee at the local restaurant. When she got there, she realized she had to use the bathroom first, so she asked the first waiter she saw. "It's down the hall and on your right," he answered.

Two other little piggys were on a date at the restaurant; one of them had roast beef, but the other was too nervous to eat anything. At the end of the meal, they both decided to ask their waiter where they could go to the restroom before they left.

When another little piggy walked in and ordered a lemonade, the waiter rolled his eyes and asked, "Do you want to know where the bathroom is, too?" This little piggy smiled and answered, "No, I'm the little piggy who went 'wee wee wee' all the way home!"

What do you get when you play Tug-of-War with a pig?

What is a pig's favorite color?

What do you call a hog that was wrong?

Why did the sow get mad?

Are you "boared" too? Try testing your swine terminology knowledge with this free printable crossword puzzle (and answer key)! 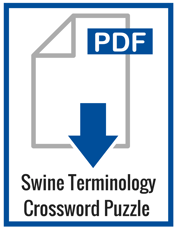 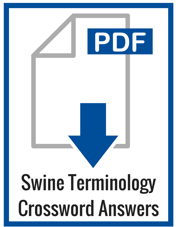 It's good to joke around every once in awhile, but it's also important to remember that data is money! Check out why below: