7 Surprises for a Newbie to Open Sow Housing

As the graphic designer at 5j Marketing + Design, I spend most of my day hidden behind a computer screen creating pretty things to post on the internet (okay maybe I do a little more than that but you get the picture). So of course I jumped at the chance to get out of the office and into a new environment when New Standard invited us to tour their sow barn design at Pig Hill Farms! Little did I know what I was getting myself into! I have compiled a list of a few things that surprised me about getting out of the office and into the barn.

As an industry outsider, the last thing I expected when heading into a sow barn was that I would need to take a shower first; but I learned that, just like with the community swimming pool, showering before you hop in helps to stop the spread of germs, and nobody likes germs! 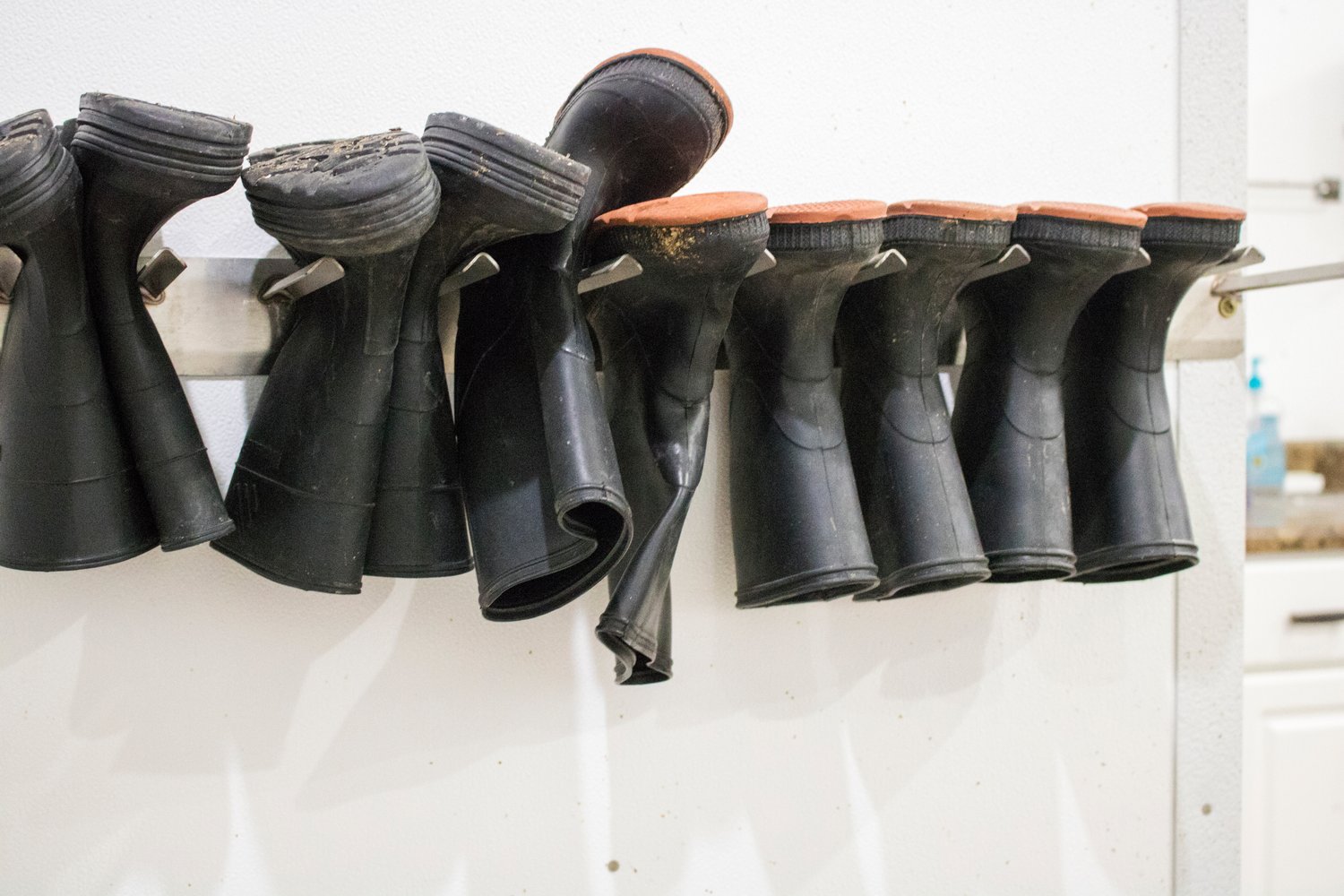 While I had been told beforehand what to expect with the shower-in, shower-out process, when we arrived at the barn I was taken aback by just how thorough it really was. Who would have thought you needed to change your shoes twice and wash your hands three times before you could hold a baby pig?

2. So Few People, So Many Sows

Pig Hill Farms has a sow head of 4,400. That's almost 1,000x the employees of 5j and 4,400 more sows than I had ever seen in my life. When we got to the the barn I expected to see staff members running all around taking care of all these sows and their babies. But instead I found only a few employees calmly going about their duties. I was surprised to learn that sows generally take care of themselves and don't need as much interaction staff as I assumed.

There are a lot of workplaces that you expect to walk in and find the room quiet, a sow barn is not one of those. Apparently, when the pigs are happy they make a lot less noise. So while, yes, they did make more noise as we spent time with them—our presence doesn't usually elicit that much excitement, so this was new for us—I was genuinely surprised at how quiet it was as we walked into each new room.

4. Curiosity Killed the Cat (But Not the Sow)

We all know that curiosity killed the cat, but this is definitely not true of sows! When we entered the open sow pens to mingle I expected the sows to run in fear—or at least walk away slowly in fear—but quite the opposite happened. The sows started to crowd around us nudging and chewing our boots. Their friendliness took me by surprise and was quite welcome—except the one who tried to knock me over as I lined up the perfect photography shot. They were very curious of who we were and what we were doing in their space. As we toured the barn we saw each separate stage of a sow journey from adorable little newborn piglets to the slightly less adorable, but just as important, full-grown sows. But it wasn't just their looks that changed along the way, their comfort level with people also grew as they did. So it was surprising to find that although the piglets squealed and ran away from us, their mothers were more than happy to have us around.

6. A Breath of Fresh Air

So this title might be a little deceiving, I think we all know you don't go into any type of barn expecting to be greeted by fresh, clean smelling air. But I was surprised by just how strongly that air can hit you when combined with the dust generated by 4,000 sows. The next day I awoke with what those in the industry refer to as a "barn cold". Apparently it is a common phenomenon for those who don't regularly spend much time in the barn environment. Thankfully it didn't seem to have any effect on the long-term employees and was just a special perk for us newcomers.

When you think about cuddly animals sows probably aren't the first thing that comes to mind, so I was surprised to find most of the sows lounging in piles together. Sows are much more social than I imagined. They were happy to rest right next to each other in the open housing even though there was plenty of room for them to spread out. My trip to Pig Hill was eye-opening. It was awesome to see the inner workings of a group sow housing barn. It made me proud that 5j works with New Standard. I'm sure that the memories of my time at Pig Hill will last for a long time. Maybe even longer than the fine aroma that soaked into my camera equipment.