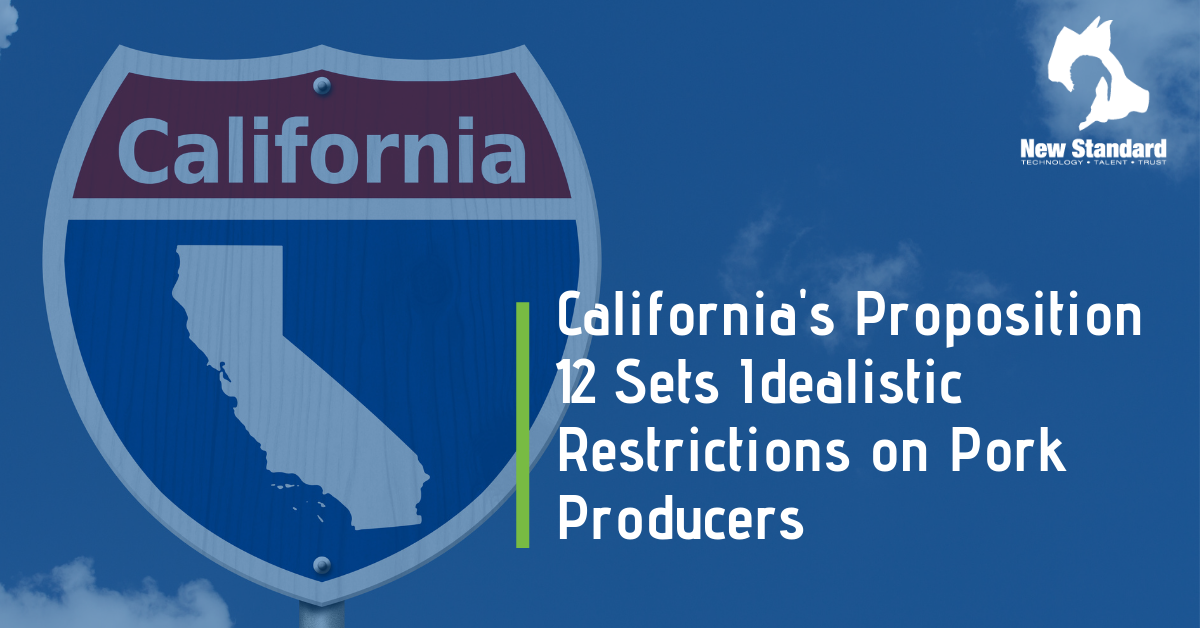 A California ballot measure is raising criticism from producers across the country who feel its restrictions are unreasonable.

Passed on November 6, 2018, California’s Proposition 12 set out “to establish minimum space requirements based on square feet for calves raised for veal, breeding pigs, their immediate offspring and egg-laying hens.”

It subsequently bans the sale of any such veal, pork, or eggs from animals raised in facilities that do not meet those requirements.

How Does This Impact the Pork Market?

If fully implemented, all hog producers in California, or those hoping to sell pork into California, will have to upgrade their facilities to meet square footage requirements. In fact, the impact on imports to California is larger than that on in-state production.

Tim Kurbis from New Standard weighed in on Prop 12, "While the bill may make some feel good, in practicality it is ill conceived and poorly defined. Some facilities may be able to meet the standards for hog production but not everything that relates to a sow's daily life is as simple as the language in the bill. For example, most non-competitive feeding methods would have the sow willingly confine herself while eating. She does that because she'd rather have peace and quiet while eating but the way Proposition 12 is written, that would be frowned upon.

The bill is already being challenged legally, and Kurbis notes that the common opinion among industry professionals is that it will be tied up in the legal system for quite some time. It's expected the courts will be asked to decide whether California can supersede the current understanding of the Commerce Clause to enact the measures listed in Prop 12.

Other issues with the bill stem from its widespread impact, and, “unintelligent” standards. Says Kurbis, "if the authors of the bill were truly interested in the welfare of a sow, they might have tried to understand better what she needs instead of imposing arbitrary standards that display a lack of knowledge about how a sow interacts with her space."

Another problem is Prop 12 lacks clarity as far as who will be auditing the farmers, and how. Penalties prescribed for non-compliance are steep though, so while it may be tempting to buck the system and hope you don’t get caught, Kurbis says it could cost you big time.

“Worst of all is that if implemented, this may force people to adopt practices that may not be in the best interest of the sows themselves,” he said.

The size of California’s market plays a large role in the bill’s impact. The state’s market alone is larger than all of Canada’s, and industry estimates say the bill would fiscally impact around 99 percent of all production in the United States.

"While it may make certain people feel good,
the law displays the authors' lack of knowledge"

As far as putting it into practice, Kurbis believes there are very few facilities that would currently qualify under the bill’s wording. For some facilities, compliance might only require a reduction in herd size, while others may have to completely rebuild their barns.

While the bill itself is problematic, New Standard is of the opinion that loose sow housing is a positive and efficient way to structure your production. "When properly implemented, group housing can produce as well if not better than a crated barn would".

New Standard’s barn designs are not far off from the bill’s requirements, and a move toward more loose sow housing would certainly be positive in the long-term, for both animals and producers.

“We’re not in favor of any government mandates, the market itself should influence what producers decide to do,” said Kurbis.

As we wait for Proposition 12 to move through the courts, it’s likely that similar laws will begin to crop up. Ultimately, the industry is being forced to seriously consider its practices. How will your facilities fare against this shift?