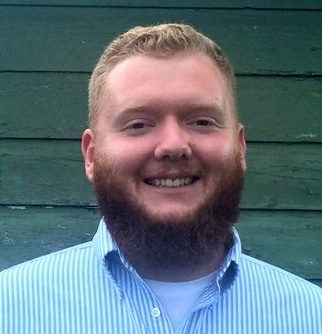 Tuesday was not just another day in the 5j Design office. Nope, on Tuesday, we had the wonderful opportunity to see what one of our clients does...by taking a tour of a hog barn. Jake and I are the web guys for New Standard, and typically we don't like to call ourselves city boys. But let's face it, when in comes to farming and livestock production, we are definitely city boys. Tim and Ben from the New Standard Group were gracious enough to take us where we had never been before. Read more about our first journey through a group sow housing barn.

The morning started with coffee and donuts, just as every good day should. We then hopped in the New Standard Group trucks and started rolling out to one of the hog barns they designed. It was about a 35 minute drive to the farm, just enough time for the four of us to solve all of the world's problems. We pulled up to the barn, and I thought to myself, "Alright, its go time!" I promised myself I would make it through the tour and be stronger in the end, no matter what I saw or smelled (or how much I smelled afterward). We jumped out of the truck with our boots covered in plastic boot covers and then headed in the doors of the facility. And there were all of the pigs and a smell so strong you couldn't breathe, right?! Nope, there was nothing but a little room with a folding chair, more plastic boot covers and a coat rack.

Shower In, Shower Out

Now, we knew that biosecurity was a big deal at hog barns, but all we had been told was that we had to "shower in and shower out." Simple enough, we can do that! So after we put on a second layer of plastic boot covers, we placed everything we needed to bring into the barn into a UV oven before heading through a door to a room with a bench running wall to wall splitting the room in half. There were plastic covered shoes on one side of the bench and a series of doors on the other. We were told that we had to sit on the bench, take our shoes off (not letting our socks touch the ground on one side) and swing around and plant our feet on the opposite side of the bench. Then came the realization, they said we had to shower in...like high school locker room style? Am I about to get to know my boss and the New Standard guys way too well? Not to fear, each of the doors in the room were individual shower lanes.

After we got into our individual shower stalls, we had to strip down on one side of the shower, take a full shower, and exit the other side. For biosecurity reasons, you cannot go back to the other side without re-showering. Once I exited the shower, I toweled off and looked in the cabinet to find underwear and socks. The socks were folded together, so I knew they had to be clean, but the underwear were laying in a pile on the shelf, some semi-folded. These are clean right? I decided to trust the process and just put them on. I then grabbed the biggest pair of coveralls I could find. They were still too small, but I decided to roll with it and rock my high waters. I exited the shower stall confidently, but I must have looked like a fool. Some of the barn staff members giggled when they looked at me and multiple people suggested I try on a more "comfortable" pair. In the end they were right, the bigger size was so much more comfortable.

Sights, Sounds, and Scents of an ESF Barn

Once we were all ready to go, we grabbed our camera equipment and headed towards the barn. We went through yet another door to a room with another full length bench splitting it in half. We had to do the opposite as before and keep our socks on one side and put on rubber boots before touching the other side. We slipped our boots on as we swung over the bench, and we walked over to a door that opened to a long hallway that connected all the barns. As Tim and Ben lead us to the Electronic Sow Feeding (ESF) Barn at the end of the hallway, I was surprised at how underwhelming the smell was, at least for the time being. We then opened the door to the group sow housing barn and there they were, all of the pigs and all of their odor. But it wasn't anything like I was expecting. You definitely noticed the smell, but it wasn't nauseating and it didn't smell like what you would think manure would smell like. In fact, I can't even describe what it smelled like, the air was just heavy and strong.

The guys from New Standard guided us through a series of hog gates before we reached the group gestation pens. When a lot of people imagine a hog barn, they imagine each pig being held in tight stalls with barely any room to move. This was not the case. The sows were waddling around in a huge pen with lots of room around them. Many of them were laying next to each other in a large group making them look squished for space, but what I have learned is that sows enjoy laying next to each other because they like each other's physical touch. I'm not an expert on animal emotions, but it seemed like all of the sows were extremely comfortable and happy. The only aggression I saw was when one sow would stop in the exit lane of the electronic feeding systems and the next one would give her a nudge from behind. Heck, I tend to want to do that when people are in my way too!

As we got deeper into the barn, I also realized how quiet it was in there. Here we were standing next to thousands of sows, and we could still talk to the person beside us without yelling. The only constant squealing from the pigs was when they were being vaccinated. These girls seemed relaxed and were not bothered by us one bit. In fact, when we walked through the pens, they didn't even run from us. They simply stood there quietly and gave us little nudges as we moved by them.

After a full tour of the barn, we made our way back down the initial hallway and back to the break room. There we discussed more about the barn operations and what daily work life is like in an ESF Barn. We also got to know the barn managers and their team. They were so down to earth and treated us like we belonged there, even though we clearly did not. We couldn't have asked for better hosts. They even feed us a full meal (hot stromboli fresh out of the oven) before we took off!

Will We Keep Eating Bacon?

Absolutely! Ever since we toured the barn, Jake and I have heard this question over and over. We assure people that there was nothing we saw that would keep us from eating pork. In fact, I had a pork chop that night for supper. I also have to mention how incredible the barn staff was. They were very gracious to us, and they cared for the animals like their own pets! As an animal lover, that was really cool to see.

This was a great experience learning more about what our client does. But even more, it was an amazing opportunity to see inside an industry that is such a vital part of our local communities and global economies. We want to thank New Standard and the Pig Hill Farm team for allowing us inside their facility and being such great hosts!