ESF in Europe a History with Mikael Kirk

In recent discussions, we have been fairly nostalgic. Spending time thinking about where we came from can be helpful in figuring out where we are going. Also, as we have many relationships and conversations with our European neighbors, we are reminded that at least here in the US, we are behind in some of the latest in terms of animal well-being. This is not to say everyone is behind, but as a whole, compared with Scandinavia and Europe we have areas we can still improve and grow in to.

We recently were able to talk with our good friend Mikael Kirk of AgriSys based in Denmark. Mikael founded ArgiSys in 2009 and has experience with transitioning many barns to ESF as well as new projects all over the world. 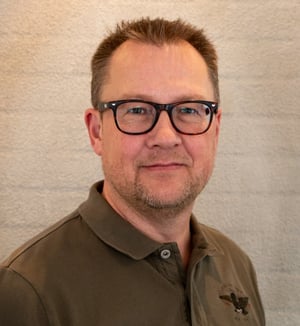 Little did Mikael know, shortly after the founding of his company, a worldwide financial crisis would hit. With a background in livestock housing, he was presented an opportunity to become a dealer for Nedap equipment. He figured it was a good option with his history and personal connections he already had. "It was either the best time to start or the worst," recalls Mikael. He decided to jump in head first with, he did the installs himself and surrounded himself with industry experts.

It turns out, the timing for AgriSys was the best as you'll learn.

Getting back to loose sow housing. And when it started taking hold in Europe...

It started in the late 1980s with alternative farmers. "folks with longer hair than most." jokes Mikael. They had another approach and were experimenting with it. ESF (electronic sow feeding) became more general knowledge in the 1990s, with some larger scale farms starting to adopt the equipment and practices.

"The biggest jump and change we had was in the 2000s. We were at about fifty-fifty ESF and Free Access Boxes, and in 2004 legislation passed that if you build a new barn, it had to be loose sow housing," states Mikael.

That rule was just the beginning - the EU (European Union) ruled that by 2013, everyone needed to adopt loose sow housing for pregnant sows, new and old barns alike.

Mikael recalls this was a tough time, because of the world financial crisis, it was challenging to make these significant changes for established barns, as financing was difficult to come by. As an alternative, many farms cut down the number of sows, removed pen equipment, and fed pigs off the floor. It was not optimal or sustainable but needed to be done this way in some cases to comply.

Changes had to be made. "We sold a lot of ESF equipment, but not near as much as we should have been able to." Today we are at 100% group housing and ESF, which is good because feed prices are increasing.

When asked what obstacles stood in the way besides finances, Mikael brings up more history. "The early history of ESF is our worst enemy. The history lives on from generation to generation of farmers and advisors. Earlier information, bad stories, poor training, how hard it was to work with, bad electronics, complicated systems, the list goes on." These early issues, unfortunately initially clouded the success and progress ESF was making.

Today younger farmers have overcome some of this history. "They want the connectivity," says Mikael. They have also overcome obstacles with more current information and knowledge on how easy ESF is to use, how reliable it is and how it can help keep your feed costs down, improving your bottom line.

So what pushed the EU to make these rulings and changes?

"The main push was consumer demand," says Mikael. "the impact consumers had was enormous, and it is still influencing today's pig production." Mikael also believes most of the push was focused on, "humanely raising animals, even though some of the information getting out was false."

So what's coming next? Consumers are continuing to push for transparency and want to know where their food is coming from.

"The next big shift is in farrowing pens, making them all free range pens. I believe around 20% have this implemented, but 100% is required in Scandinavia soon. I don't think anyone would build a traditional pen today; this is the effect of consumer demands."

So with these changes, we asked Mikael what results producers see, short and long term. "Requirement for higher transparency, while making some higher costs, are some of the short-term benefit as the consumer can see how animals are raised and have a good feeling with their meat choice.

"We see how much more mobile pigs can be now, and they are in turn healthier, stronger. The pigs are happier".

So it is obvious as these changes have taken place in Europe, they have adopted and have succeeded. We are seeing other countries take this approach now, maybe most notably, China.

"I was contacted in 2009 to collaborate on a solution for group sow housing in existing buildings on a large farm in China. We contracted in 2014 on the project to house, 10,700 sows in one building." As you can imagine, this project had some hurdles to overcome."Ventilation was one of the biggest problems, followed closely by local climate and logistics.

Some takeaways from our discussion with Mikael.

If you want to learn more about Mikael Kirk and his company AgriSys, he invites you to visit his website AgriSys.dk

In an upcoming article we’ll talk with Mikael again about what is to come in his opinion. Make sure you subscribe to our blog for the latest.