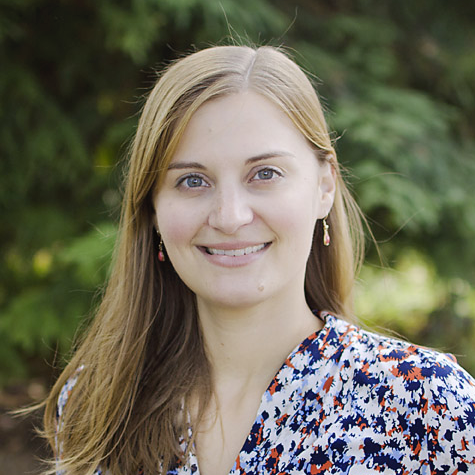 Hear from Kristina Horback on her latest research, identifying pig personalities and how they relate to aggressive behaviors in a group gestation pen.

I am currently an Assistant Professor at UC Davis in the Department of Animal Science. My background and my previous research is focused on animal behavior and cognition. I worked for about eight years with primates and dolphins on information processing and communication; some of those animals were in captivity, and some of them were in the wild. I essentially looked at social behavior and how animals are communicating a threat or compliance with the group around them. I switched to swine research when I went to the University of Pennsylvania's Veterinary School. There, I started working with Dr. Thomas Parsons, who worked exclusively with ESF barns. For over a decade, Dr. Parsons has helped swine producers to convert their sow housing from stalls to pens by providing advice on resource-based changes, such as barn design, feeding systems, or strategies of mixing individuals after breeding. I have focused the majority of my research on animal-based measurement, such as personality traits or emotional state, specifically in piglets, gilts, and sows.

Dr. Parsons hired me to investigate the existence of personality types or temperaments in group-housed sows. We were trying to identify behavioral traits in the sows which were consistent over time. In one large study with 50 females, I carried out different behavioral tests looking at social isolation, threat from a human, moving down a hallway, or how sows interact in a new group. We put them through a battery of tests so they could show their true colors, and we were able to extract the most relevant behaviors to combine into three traits: interaction with environment (called exploratory), interaction with humans (called avoidant) or interaction with other sows (called aggressive).

Sows with high ratings on the exploratory trait will smell every nook and cranny when placed in a new pen, and they’ll go around make snout-to-snout contact with almost every other sow in that pen. Sows with high ratings for the avoidant trait do not engage with humans in a familiar or novel environment, and will keep a large flight-distance from humans when being moved around a barn. Sows with high ratings for the aggressive trait will start and win more fights than other sows when mixed into a new social group, and they will be more aggressive toward humans 24 hours post-farrowing when their piglets are being handled.

I have been identifying different consistent personality traits or temperaments in sows over time. I kept the sows in their second parity and then they went off to farrowing. When they came back to the group gestation pen, they were all consistent in their behavior.

I followed up this initial study with a study of the development of these traits. In this study, I followed a group of 40 gilts from birth, looking at weight gain, teat rank, fighting and playing in the farrowing pen. Then I followed them through the weaning, grow, and then they were put into the barn as replacement gilts and eventually reproducing sows themselves. I’m just submitting that study for publication and I’m looking at a lifetime productivity or illness as it relates to these personality traits in the females.

So What Am I Trying to Find?

My major goal is to increase awareness of individual differences in sows. You see when there are animal care takers that have that knowledge: "this sow, she’s an aggressive sow, or this one, she’s little bit more shy." I'm trying to take that intuition of animal care, and quantify it. If we can do that, then maybe we can look at the compatibility of the group or understand that some sows may be more prone to have stomach ulcers because they are the stressed, anxious type, and understand that we need to pay attention to these individuals because they are more likely to be suffering from illness. Traditionally, farmers have said, "Well I’m not going to breed her, you remember how aggressive she was." My goal is to actually find that out, is that inheritable or not? I am trying to identify personality traits that we can relate to each sow's health and the welfare of the group.

When we have producers visit and they want to know what I do, I explain that we are trying to find predictor traits. You can have a backfat phenotype or leg lameness phenotype; that is something that is being looked into for both sows and boars. What I am looking for is a behavioral phenotype. If we can find early signs of aggression or stress vulnerability in piglets, we can choose not to insert them into the group gestation pens.

The biggest threat to group housing is sow aggression; there are those that will harm others or harm themselves, which can lead to abortions, injuries, and even mortality. Perhaps if we can pick those out that are hyper-aggressive, we can reduce the number of aggression issues within group pens. There's even a chance in the future we will move away from farrowing crates. We need to know about sows that are far too aggressive towards humans at farrowing time, or, are unresponsive to their piglets’ squeals when they are being crushed by the sow’s weight.

My research suggests that young gilts which squeal and struggle when held by humans (or restrained) will typically have a similar and consistent reaction over their three or four weeks in farrowing. When these pigs grow up, they tend to be the more aggressive ones in the gestation pens.

All of the behavior tests I am using in these studies are designed to be easily transferred in on-farm testing by animal care staff. Routine piglet processing requires some animal handling for ear clipping or iron injections. Perhaps the staff can keep a record of the piglets which struggled the most during processing and check on these particular piglets for aggressive behavior in the nursery pens.

I started all of my work in animal behavior, not from an applied sense, just to understand the species. I really just want to understand how sows communicate with one another when they are threatened or anxious. I look at the social network of sows in pens and how the sows tend to cluster in groups, or cliques (like at a high school cafeteria) and eat with their social group.

A large issue with group housing for producers is finding a certain individual. In a crate system, you know exactly where individual 2240 is located. In a group system, that adds a lot of chaos. But if you can have those behavioral metrics to know that of a certain age and of a certain type in a pen, you can find a specific sow because you know where her group meets up.

All of this could make it easier for producers to handle this big change. Consumers are then happy with all the effort that is going into taking care of the animals.

I am currently replicating my study of the development of personality traits here at UC Davis. I have followed a group of gilts, born in February, and half of them went to market and the other half are being cycled into our smaller research herd here at the University. My interest is going back to the basics of cognition, so I’m using some different psychological experiments. Basically, in many species, including humans, rats, dolphins, chickens, and pigs, information processing is clouded by emotional state. So if you are in a positive state, you are going to memorize words that are a little more happy or you are going to pick up on things that are a little more positive in your environment. The same is true if you are in a negative space. If you are more anxious or fearful, you are going to say “What was that?! What was that?!" This is called a cognitive bias; it is a preference for the mind to process certain information.

I’m running tests to look at that cognitive bias in our sows, and I'm learning that some of those more aggressive, bold individuals may actually be in a more positive state. They may be having a higher mental welfare which would make sense. When I assess the emotional states of the sows that are lower on the totem pole (non-aggressive, non-active), at any given time they are much more negative. Again that makes sense. They’re looking for the next threat around the corner or they're anxious.

I'm building on this work and trying to compare this personality and mental state with other species. I’m starting to organize projects to investigate temperament in sheep and cattle to investigate how such behavioral traits relate to stress response, weight gain, and illness prevalence. It all goes together. If you are in a really high stress state, you probably aren’t going to gain weight because you will not be spending time eating (but will be spending time looking over your shoulder), and you're also going to be more susceptible to diseases in this hyper-active stress state.

Animal Welfare For the Industry

With my personality research, I’d like to help farmers engage more with their animals, not to say I’m an expert because they certainly know their animals better than I do. I’m interested in animal welfare for the industry not against the industry. Given our ethical responsibility as animal care takers of this domestic species, and the large need to produce a robust and healthy protein source, I hope that my research can help both the animal and the producer.