Save Time, Feed, And Money 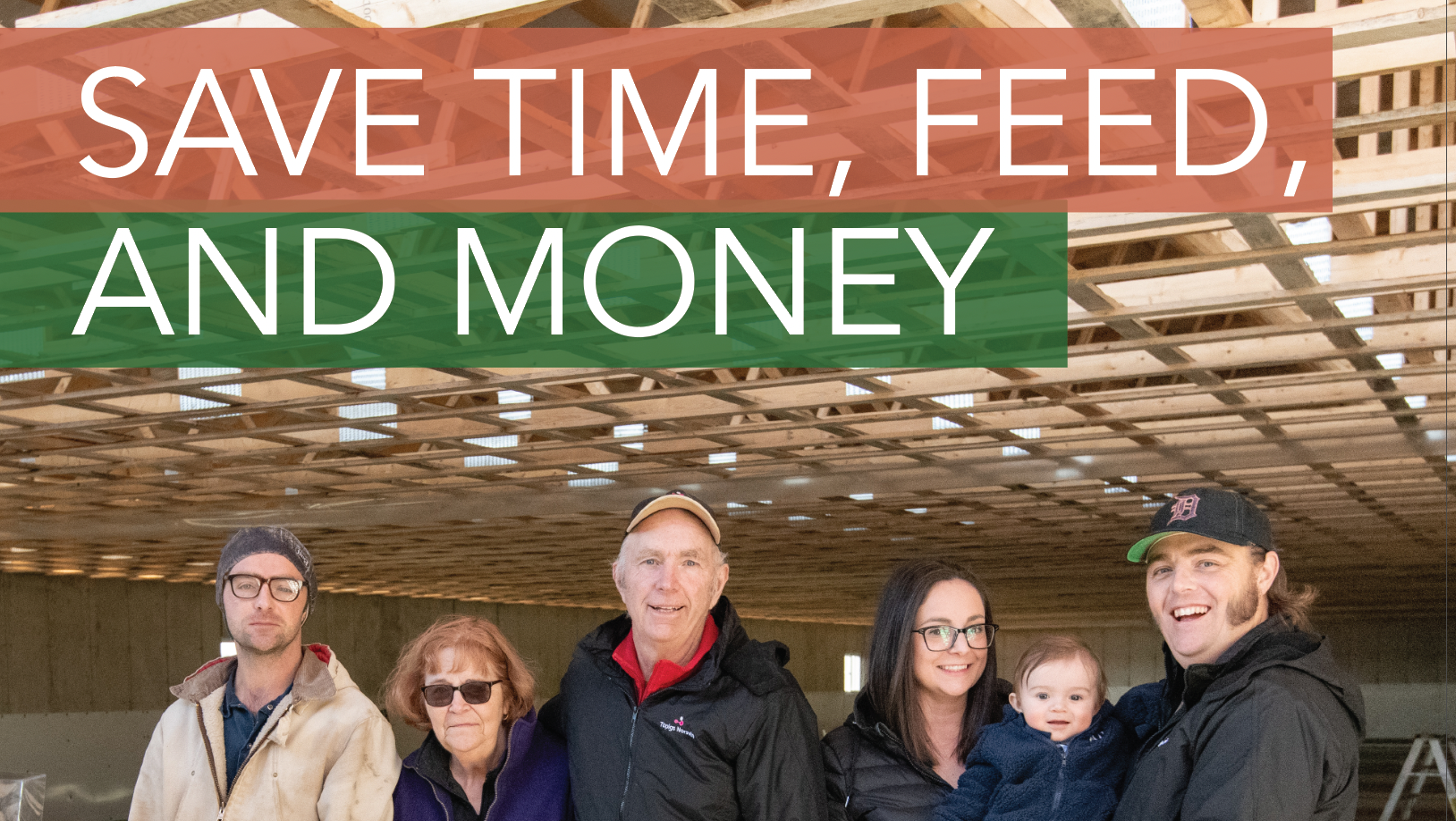 Success in farming is a matter of making smart choices and finding the right partners. When Darren Sloan and his family were preparing to expand their sow farm in Ontario, Canada, they spent three years assessing their options and fine-tuning plans for an updated feeding system.

That turned out to be easier, though, than finding suppliers who were willing to provide more than cookie-cutter “solutions.”

“We considered the best environment for our pigs and how we could redesign our barn to raise better piglets,” says Darren, who farms near Chatham in southwest Ontario, about an hour east of Detroit, Michigan. “Salesmen will tell you great stories that if you change your way of working, their product will fit your system. But why should I change the way I work?”

He didn’t have to compromise, thanks to a unique collaboration between the Dutch company Vereijken, which supplies swine barn equipment, and PigEasy. “We like Vereijken and are glad they were willing to team up with PigEasy, since they offer a feed system we really wanted to work with,” Darren says.

The Sloan family’s renovation plans took shape a few years ago after Darren returned home to farm full-time after working in construction for seven years.

“Our original barn was built in 1994, but our facilities were getting worn out and needed to be replaced,” says Darren, a fourth-generation farmer who raises early-wean pigs.

The Sloans decided to expand their 550-head sow operation to a 1,100-head sow farm. They also wanted to switch from feeding by hand to an automated system. “Hand feeding was so time consuming,” says Darren, whose family includes his wife, Vanessa, and their son, Grayson, who is almost 2 years old. “It took me an hour and a half each morning just to feed the sows.”

As the Sloans developed a renovation plan, Darren thought back to his construction career, which taught him the importance of customizing projects to the owners’ unique needs.

Darren and his father, Lyle, thoroughly analyzed their current system to determine what worked well and what could be improved. “We are owner-operators and were willing to put a lot of time and effort into redesigning our barn,” Darren says.

They also spoke with lots of fellow pig farmers and ag suppliers to get a broader perspective. “This really helped us to make a renovation plan that works for us and also meets current sow housing requirements,” says Darren, who serves on the South Western Ontario Pork Conference board.

Unfortunately, it wasn’t easy to find a supplier that shared the Sloan family’s enthusiasm for this customized plan. “We got pushback from companies that sold barn designs,” Darren says. “Some said, ‘You don’t want to spend your money on that system,’ even when we did want to spend our money there. Those companies were more interested in selling us their idea than helping us reach our goals.”

The Sloans didn’t give up. When they attended the Ontario Pork Congress and trade show a few years ago, they started connecting with companies that were willing to help them reach their goals.

“At the 2018 show, we walked by a booth where we saw a cool-looking doohickey that metered out feed to the sow,” Darren says.

That turned out to be PigEasy’s MealMeter, an ad-lib feeder that gives sows the power to decide when they want smaller portions. This design allows sows to access fresh feed anytime they want, plus it reduces feed waste. “Even though PigEasy’s system seemed very simple and effective, I figured sows would just play with the MealMeter,” Darren says.

About a year after the Sloans first saw the MealMeter, they asked PigEasy to send them some equipment to try. They retrofitted two sow crates with the PigEasy feeding system and were impressed from the start. “The sows didn’t play with the MealMeter or dump feed into the manure pit,” Darren says. “We knew this was something we wanted to incorporate into the 192 farrowing crates we were planning for our farm.”

The Sloans explained this to Vereijken, the company in the Netherlands that was supplying some of the equipment for their expanded swine barn.

“Vereijken’s engineering department worked with PigEasy to see how they could make their products fit,” Darren says. “Instead of telling me we’d have to change things to fit their products, these companies saw our vision and considered what works best for our business and the way we manage things.” 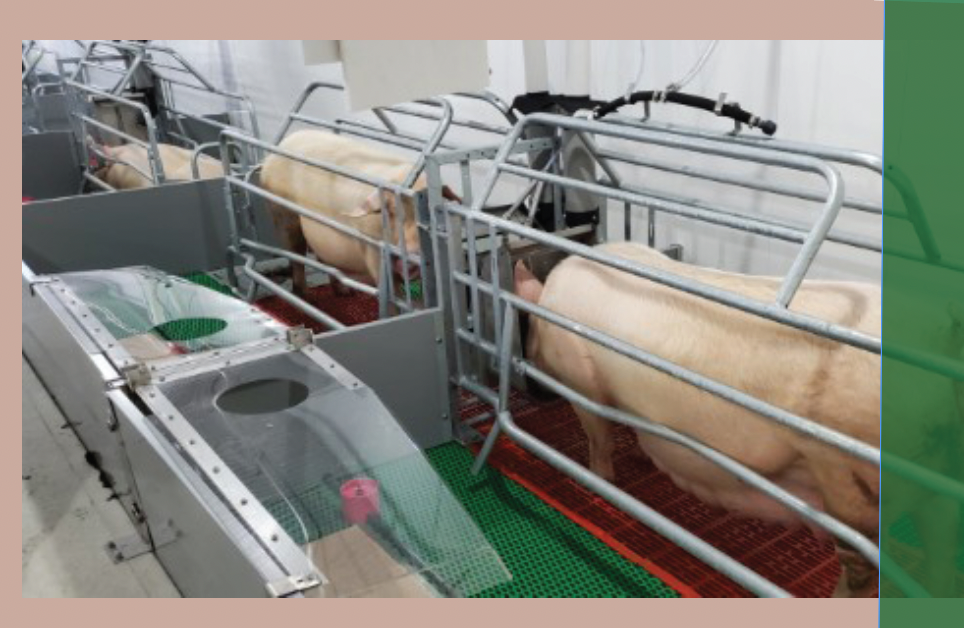 The MealMeter feeding system has allowed the Sloans to eliminate hand feeding and provide sows with easier access to the nutrition they need.

“While we fed 3.5 to 4 kilograms (7.7 to 8.8 pounds) per sow each morning and afternoon when we were hand feeding in the old barn, we can put 6 kilograms (13.2 pounds) of feed in the hopper with the MealMeter,” Darren says. “Our sows in the farrowing rooms now eat as much fresh feed as they want, when they want.”

Some lactating sows eat 24 to 30 pounds of feed a day with the MealMeter, with little to no feed waste. “We want our sows to have as much feed as they need,” Darren says.

That’s especially beneficial in the summer. “When I was hand feeding on hot, humid days, the sows didn’t want to eat right then, but I didn’t want to come back to the barn and feed them at 10 p.m.,” Darren says. “I don’t have to worry about that anymore.”

All this contributes to greater animal well-being, which helps the Sloans produce bigger piglets more efficiently year-round. While the family had been raising pigs in the 6- to 6.5-kilogram (12.2 to 14.3 pound) range within 19 to 21 days of birth in the old system, piglets are now reaching 15 to 17.5 pounds in the same amount of time. “When Mom eats better, her piglets grow bigger and healthier, which is our goal,” Darren says.

Darren also appreciates that PigEasy is owned and operated by people who raise pigs and understand farmers’ challenges and needs. “They aren’t just salespeople. Their own farm experience speaks volumes.”

This support is a big plus for the Sloan’s family farm, which is twice the size it was just a few years ago. “Pig farming is definitely not easy, but I like the challenge,” Darren says. “If you don’t find the right partners to help you reach your goals, keep looking. Companies like PigEasy will work with you and provide the solutions you want.” 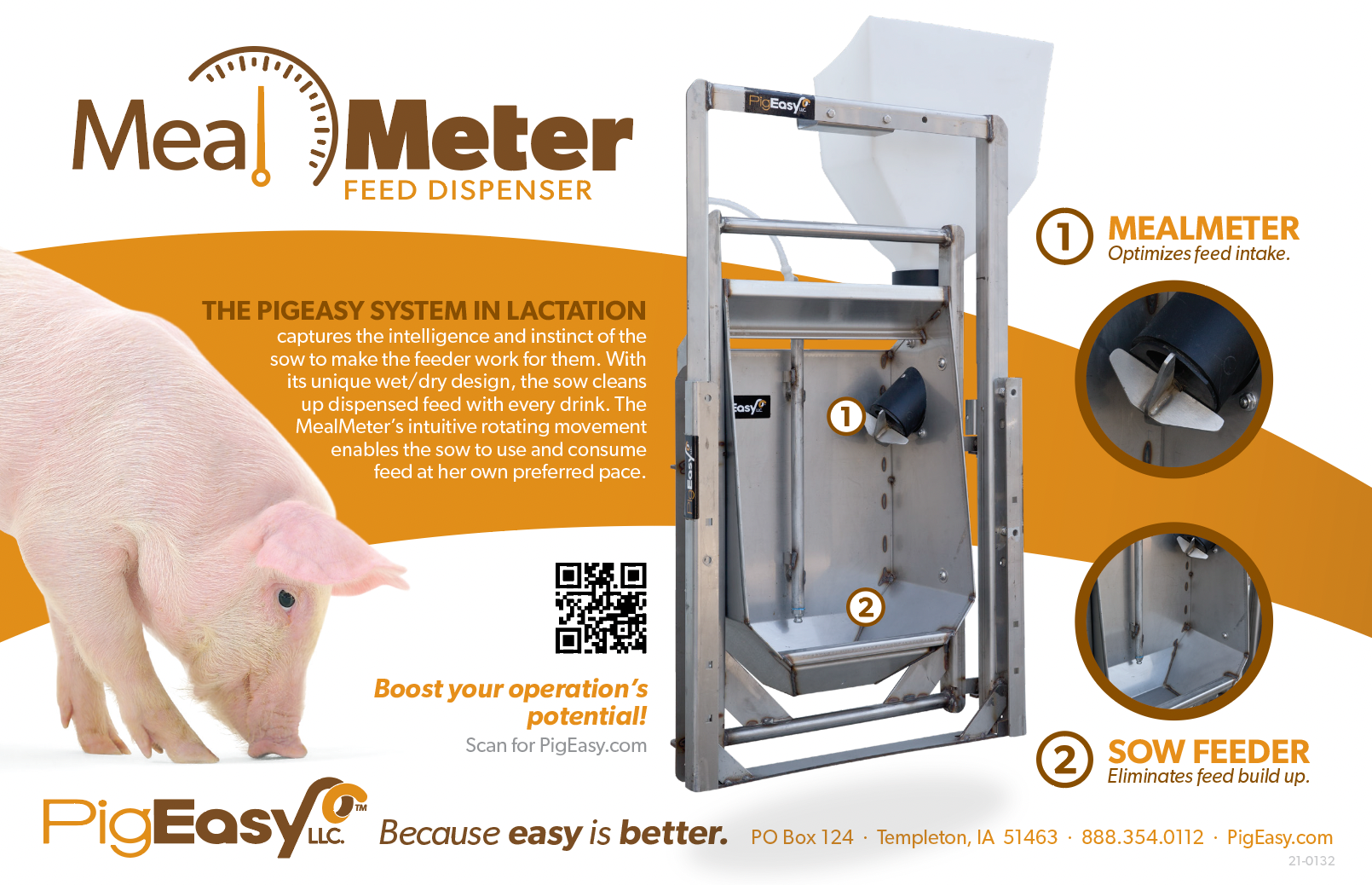 This article first appeared in the 2021/22 Modern Producer magazine and was contributed by PigEasy LLC.